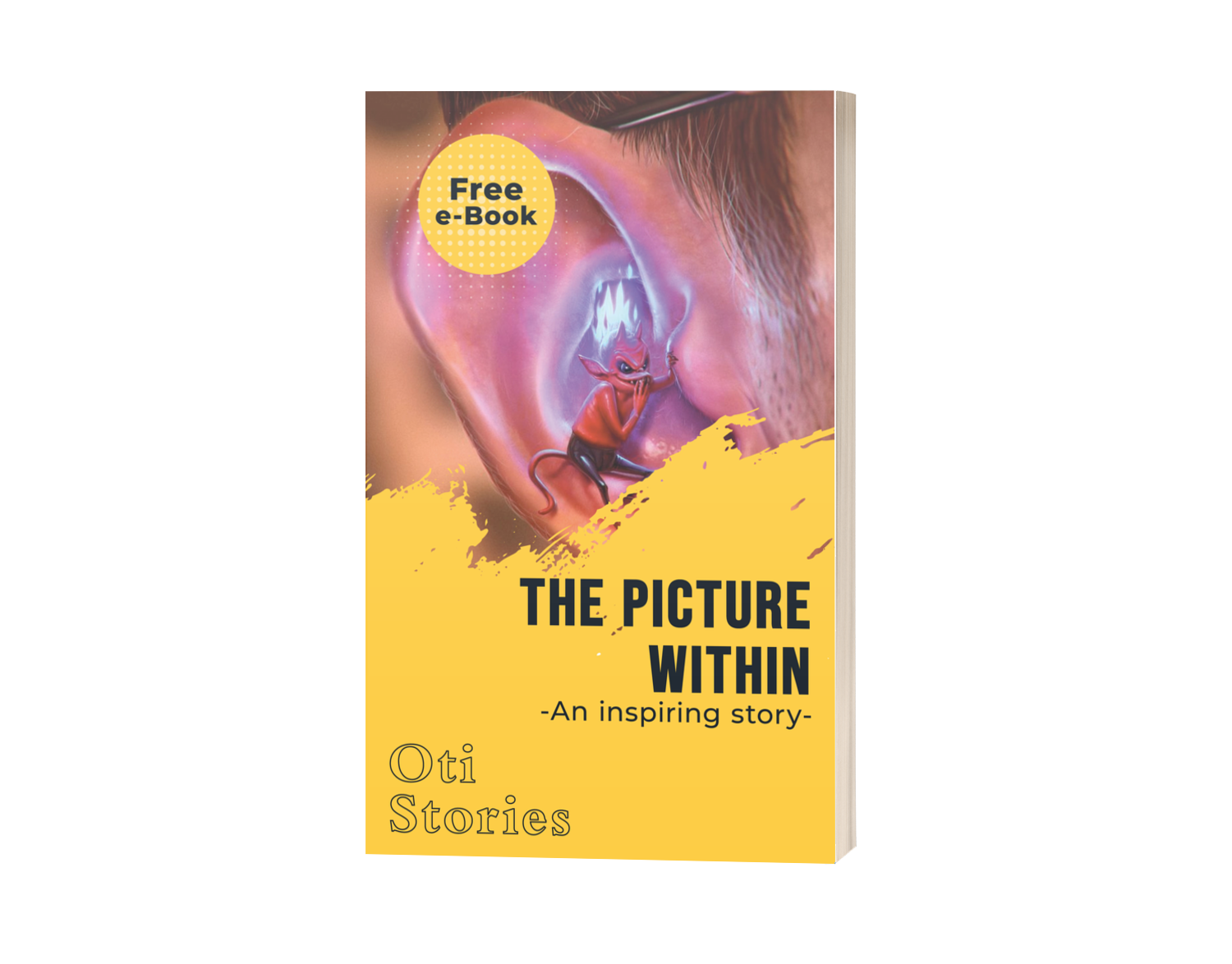 This is a story that, will teach you the secret on how to get rid of thoughts that affects one’s life negatively. It will also enlighten you on how to intentionally use your thoughts to cause great positive changes in your life. This story is just the full package. Read and be blessed.

I am a Christian who knows her rights and privileges as a Child of God. Yet, I didn’t understand why I was going through this particular life threatening challenge.

I was really enjoying God’s love. And I had seen His mighty hands at work in my life on several occasions. In fact, there was nothing that was impossible for me. I was living in the supernatural realm already. I lived my life totally by Faith.

After giving birth to my first child, I made up my mind not to have another baby until my child turns five years old. Going by this decision, the natural thing for me to do was to go for family planning. But, I didn’t. I depended so much on living supernaturally by faith. So, I decided to go about it the supernatural way.

I wasn’t trying to see if it would work for me. I knew that it would. In fact the Supernatural always worked for me. It had become my life because, I had an understanding that Faith is the frequency of the kingdom, and that it  was the most perfect means of getting things done. However, I also saw Orthodox medicine as a gift from God to the world. But aside that, I had come to know and understand that Supernatural healing and health was the original plan of God. And that it is available to every child of God to take advantage of. As long as there is a supernatural way to achieving a thing, I considered that my default and permanent option.

It wasn’t as if I completely disregarded physical remedies. The supernatural way is just a sure way to get things done for me. Sometimes, the solutions it provides are divinely led and backed up physical actions that could be supernatural directions on what to do to bring about my desires. While other times it gets things done totally spiritual with perfect miraculous manifestations.

In the case of my family planning, I began to pray towards it. I desired a divine leading on what to do. I just didn’t want to randomly choose any birth control  method.

So, one day as I was praying in the bathroom, it struck my spirit that I could actually have a miraculous birth control without any physical method. Instantly, I was led to speak to and command my womb to comply with my desire.

As I meditated further on it, I heard the Lord say to me:

“YOU HAD A PAINLESS DELIVERY BY SPEAKING MY WORDS AND PROPHESYING TO YOUR WOMB. YOU CAN ALSO ACHIEVE THIS BY DOING SAME.” And that was it. That day, I was so joyful. It always felt good to know the way out.

I prayed, spoke God’s word and prophesied to my womb constantly. The first month it worked. I had my monthly flow. Same went for both the second and third month. Then in the fourth month, I noticed that my flow got late by a week. During the first few days, I didn’t take it seriously. But after about a week, I began to get really bothered. After I had prayed about it, I felt led to hit my tummy and to command my menstrual flow to begin.

I did just that and it came out immediately. Hence forth, I began to command it to come whenever it felt convenient for me to have it. It was such a wonderful privilege to have my period whenever I wanted it by just commanding it to come.

A year later, something unusual happened. Three days after I had my menstrual flow, I bumped into a lady who told me that I was looking pregnant. I only laughed and informed her that I wasn’t pregnant. After which, we rounded off our business and parted ways.

After that day, I noticed that I began to have flashbacks to what the lady had said to me. But I didn’t do anything about it. The flashbacks continued for about 2 months. Then the following month, my flow didn’t come when I commanded it to come.

I waited for about a month, still nothing happened. I had several body signs and changes on different occasions, that proved that it was about to come. But it never did. A month later, I took a pregnancy test and discovered that I had gotten pregnant.

I felt so surprised. For a good number of days, I kept wondering where I had gone wrong. After a while, I decided to move on by accepting the fact that I was pregnant though it didn’t cause my faith in the supernatural to waver one bit.

By the time I was 6 months gone, I had a dream. In that dream, I saw a late friend who had passed away through a brief illness while pregnant. I didn’t actually take the dream seriously because I wasn’t supposed to. Rather, I felt I was only missing her. This continued  until the bomb struck.

I suddenly began to experience something I’d describe as a strange illness. It wasn’t a very serious illness as such. But occasionally, I’d just get very weak and almost breathless.

At first, I went to the hospital to find out what exactly the problem was, but all the tests showed that I was healthy and fit. So, I began to handle it the supernatural way as usual. I gave myself to praying about it but there was no improvement. One day, it got so intense that I felt I was going to die. On seeing this, my husband who had taken this strange illness casually, suddenly sprung to action. He didn’t eat, neither did he bathe. He prayed for hours until he finally got to lay hold on my healing by establishing and enforcing my healing in the Spirit by the power of the Holy spirit.

When he was done praying, he shared an experience with me. He said that while he was praying, it was revealed to him that the devil had sought to take my life alongside my pregnancy, through this illness. And that, upon praying, IT HAD NOW BECOME IMPOSSIBLE FOR ME TO DIE standing on my victory in Christ over death.

He then instructed me to focus my mind on scriptures pertaining to LIFE.. He told me to keep confessing that: “the Life Giving Spirit (Holy spirit) is in me and it quickens and gives life and strength to my body”.

Immediately after he said this, it struck me hard that MY THOUGHTS had been responsible for the unusual occurrences I had been experiencing. I began to recall different instances:

Like the day, I had a thought that my toddler was going to fall sick, and 3 hours later she did.

Like when I had a thought that I was going to be stranded financially in a particular month, and then it turned out so.

Like when I had a thought that I was going to have a serious argument with my husband, and it certainly occurred.

There was even a time, back in school, when I had a thought that I was going to carry over a number of courses, and it definitely happened. After I had successfully carried it over and retaken the exams the department discovered that I didn’t even fail those courses and that it was a mix up. But by then, it was no longer of use to me because I had already gone through the stress of taking the courses over again.

After telling my husband about these occurrences, he said to me:

Henceforth, I never left carelessly, negative thoughts that do not align with God’s Word for me. Immediately, they come to my mind or imagination, I rebuke them. And then, I replace them with a scripture that is directly opposite to that thought. If it’s the stubborn type that keeps coming, I often apply more efforts by confessing the scripture and setting my mind on it constantly.

Again, after realizing the power of my thoughts and imaginations, most especially the fact that they can influence my reality, I began to form the habit of having a scripture to constantly think on everyday. Well, I practised it. And the more I did it the better I got.

As for my child delivery, I placed before my mind Isaiah 66:7 which says: “Before the Labor comes she shall give birth and before the pain comes upon her, she has delivered her son.” I believed, accepted and focused on this scripture. And whenever the thought of my late friend came to my mind, I always rejected it and confessed that, “I am alive with the life of God. I think life… I see life. “

Few weeks later, I had my child. I didn’t die and my delivery went exactly the way Isaiah 66:7 said.

The pictures you have within, allow within and carelessly ignore within matters a lot and they can influence the happenings in your life. You need to start cutting them down and replacing them with God’s will (God’s Word).

Just as your words are seeds that germinates and bears fruits in your life, so your thoughts are pictures that reproduce itself in your life. Re-align your life today. See yourself as one who has to live only what the Word of God says. If only you’d begin to see God’s Word, imagine God’s Word, Confess/recite God’s Word and think only God’s Word, Oh what a perfect life you would have. I THINK LIFE…