DRAWN FROM ITS SHEATH

DRAWN FROM ITS SHEATH 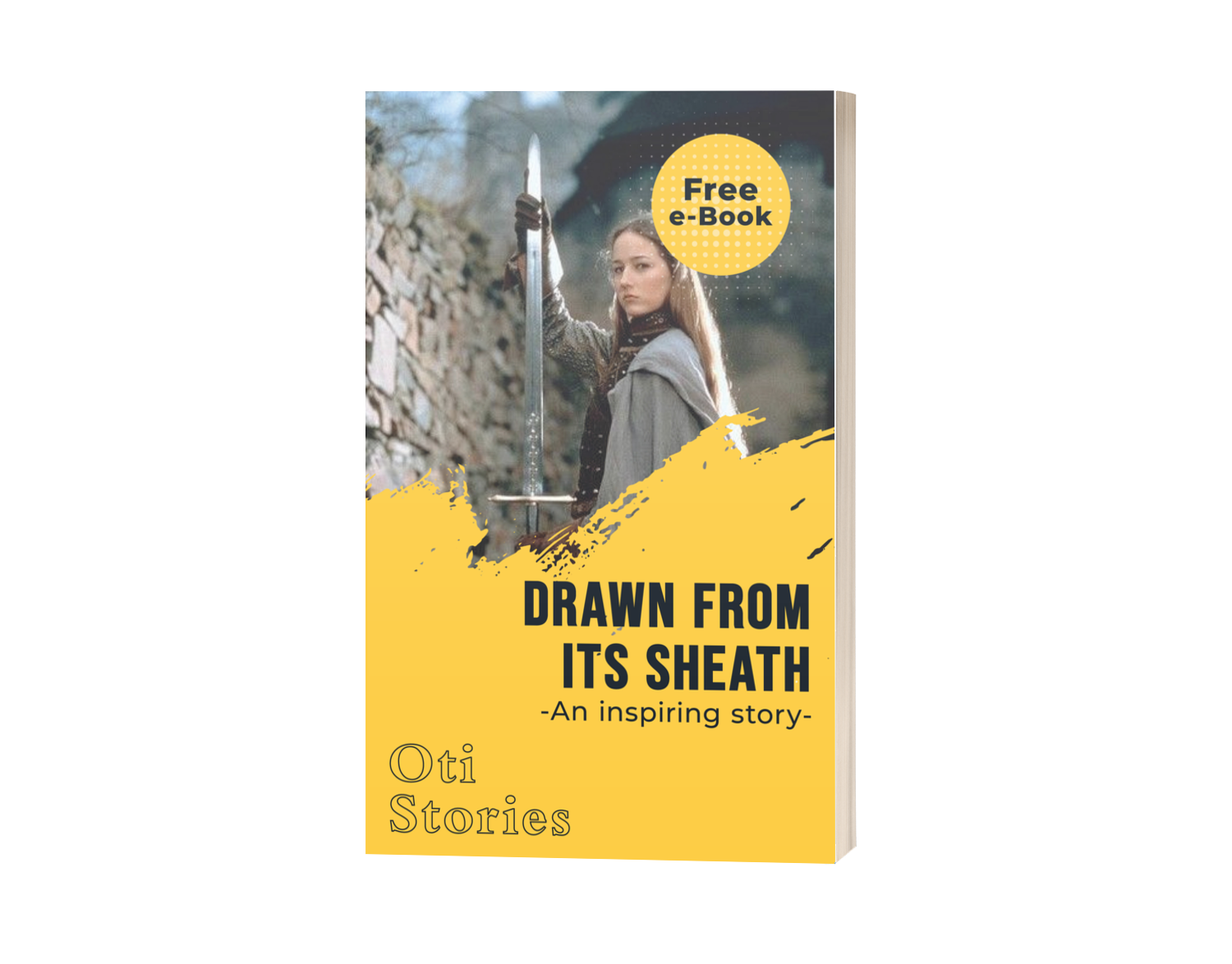 Have you ever prayed against something bad, only for it to still happen? Do you doubt that prayer actually works? Read and find out why it happened.

That morning, we all assembled in the sitting room. It was exactly 7am and it was raining cats and dogs. Well, our Dad had to embark on a journey that morning. Suddenly, my younger sister began to feel weird about the journey. So we decided to pray with daddy before he steps out. Personally, I had a strange dream the previous night, concerning daddy’s trip. In that dream, I saw my Dad in a ghastly motor accident. I woke up feeling very frightened. But then, I suddenly remembered a phrase that I always hear at the beginning of every “Prayers for Today” with Oti Stories Prayer Community. And it says, “when we pray, everything becomes possible”. But I soon forgot about it all until my younger sister mentioned her uneasy feeling about daddy’s journey. Well, I was very confident that, if we prayed, my dad would have a safe trip.

So we held hands while I decided to take the prayers. By the time we were done praying, the rain had stopped. So without any further delay, daddy went into the car. I dropped his bags in the booth, and watched my sister drive daddy off to the motor park. Edna loved driving a lot, so most times, we allowed her to do the driving. I mean, you just have to allow her to drive if you valued your peace of mind for the next couple of days. Otherwise, she’d nag and nag and nag.

As soon as the car left the compound, I went in to prepare for an appointment. While I was still in the shower, I began to hear my phone ring from the bedroom. Unfortunately, I wasn’t willing to leave the shower until I was done. But the phone didn’t stop ringing. At first, I ignored it. But, I began to get very uncomfortable with it because the phone kept ringing again and again and again. So I rushed out to see who this caller was. I picked up my phone and saw 15 missed calls from Edna , my younger sister. I called her back immediately, but her number didn’t go through. My heart began to race fast. I tried everything I could to stay calm and remain positive. I waited for 10 mins before trying her number again. Yet, I couldn’t reach her nor did she call back.

So I rushed back to the bathroom, rinsed my body properly, and dressed up, just in case I may need to step out. Ordinarily, I wouldn’t get this worried at all because it may be that my sister wanted to inquire about something or the car had broken down on her way home, etc… But I couldn’t just feel at ease because all the while, the dream I had the previous night kept flashing in my mind. After waiting for an hour for a call from my sister, I decided to quit my unfruitful attempt to stay calm and positive. I headed straight to the motor park to see if I could find her there.

On my way to the motor park, a call finally came in. I grabbed my phone as though my life depended on it just to find that the call was from Alex, my sister’s friend. I was a little disappointed to see that the call wasn’t from my sister. But I took the call only to find out that it was my sister Edna , who was actually trying to reach me through Alex’s phone.

She was crying and panicking as she broke the news over the call….

“The bus that Daddy boarded lost its brake shortly after it had left the motor park. The bus left its lane and collided with

a heavy duty vehicle. I tried reaching you but, you weren’t picking up. I managed to text Alex just before my battery died.”

Well, to cut a long story short, it happened that my dad was the only passenger who survived the accident. Only that he was badly injured. It was so serious that he had to spend months in the hospital. But the issue is that, even though my dad had survived the accident, this question kept on lingering on my mind, ” Didn’t we pray? Why then did the accident still happen?”. This made me doubt the effectiveness of my prayers, every time I prayed about anything. It seemed to me that prayers do not work exactly as your desired results. And with time, I began to live in fear. Fear that prayers could be partially answered or not answered at all.

I continued to live in serious fear and doubt on the effectiveness of prayer until I stumbled over a post on Telegram. This particular post was posted by Oti Stories. And said:

“The Authority God gave Man, cannot be exercised or put to use by God on Man’s behalf. This authority is likened to a Sword that is kept in a Scabbard, and cannot be used by just anyone but its owner”

On reading that post, my eyes suddenly opened to the truth. I believe God allowed me to see that post so that I could be totally free from living in fear and doubt on the effectiveness of prayer. I stayed on that post for about 15 minutes. I kept going over it again and again. The more I did, the more I understood it.

Then just like a flash, I recalled the events on the day my dad was involved in that fatal accident. Then all of a sudden it occurred to me that the reason why the accident still occurred even after I had prayed against it, was because I didn’t use my authority. I could recall that rather than commanding the devil to take his hands-off the journey, commanding every plan of the devil against the trip to stop and commanding the already revealed accident to be abolished, I prayed that God should remove every demon that would cause daddy to get involved in an accident.

I got to understand that the command is for us to give and that decree is for us to make. Whatever decree we make on earth, is carried out by heaven. In fact, the Angels that are assigned to us don’t just take action by assumption. Rather, they move at our command. The word says in Mark 16:17b “..in my name they shall cast out demons”. It occurred to me that there’s no scripture in the bible that says that God would cast out the demons for you. God didn’t even calm the storm for Jesus. Rather Jesus commanded it to stop.

I thought God had only answered the question that kept lingering in my mind after the accident. Little did I know that God also gave me the answer for what was also coming in the future.

Surprisingly, that very night, I had the exact dream that I had on the night before the accident.This dream revealed to me that, of a fact, the devil had been after my dad’s life. I knew I had an unfinished business. So I headed for my dad’s room the next morning. Even though he had been discharged from the hospital, he still had to use a wheelchair because he had totally lost the use of his legs.

I knew deep within that God being faithful, had heard the prayer we made the morning the accident occurred. And out of His faithfulness, He preserved my dad’s life. But He also needs someone to use the authority He has given to man over the devil.

As soon as I entered his room, I greeted him, asked about his welfare and then moved closer to his bedside. Without delaying any further, I took a deep breath and then laid my hands on my father. Then I spoke with authority,

“I command you Satan to take your hands off my dad’s life now. I command your activities against my dad to stop now and be gone forever. Satan, I do not permit you to be after the life of dad ever again IN JESUS NAME AMEN”

Nothing spectacular happened after that. But I wasn’t affected by it in any way. I had already been set free from fear and doubt on the effectiveness of prayers. So my confidence was already built on Mark 16:17b. The fact that nothing spectacular happened after I had prayed, couldn’t even dissuade me from my renewed confidence in the effectiveness of prayer. I believed it was already done and that heaven was already moving in response to my decree.

Few days passed, then one week and then two weeks. Still, dad’s condition remained the same. But in the third week, I suddenly saw my dad walking. He walked all by himself, from his room into the living room where I was watching a movie. I got up immediately and began to jump and leap for joy. He later informed me that he just began to have an unusual urge to stand up. So he tried to stand up and discovered that he could now walk.

But that’s not all. I’d also want to ask you if you have ever used that authority Jesus has given you over principalities and powers. If No, why not use it now? Command the devil to take his already defeated hands off every area of your life (your marriage, your kids, business, ministry and even your country) now. An authority that is put to use is like “a Sword drawn from its Scabbard”