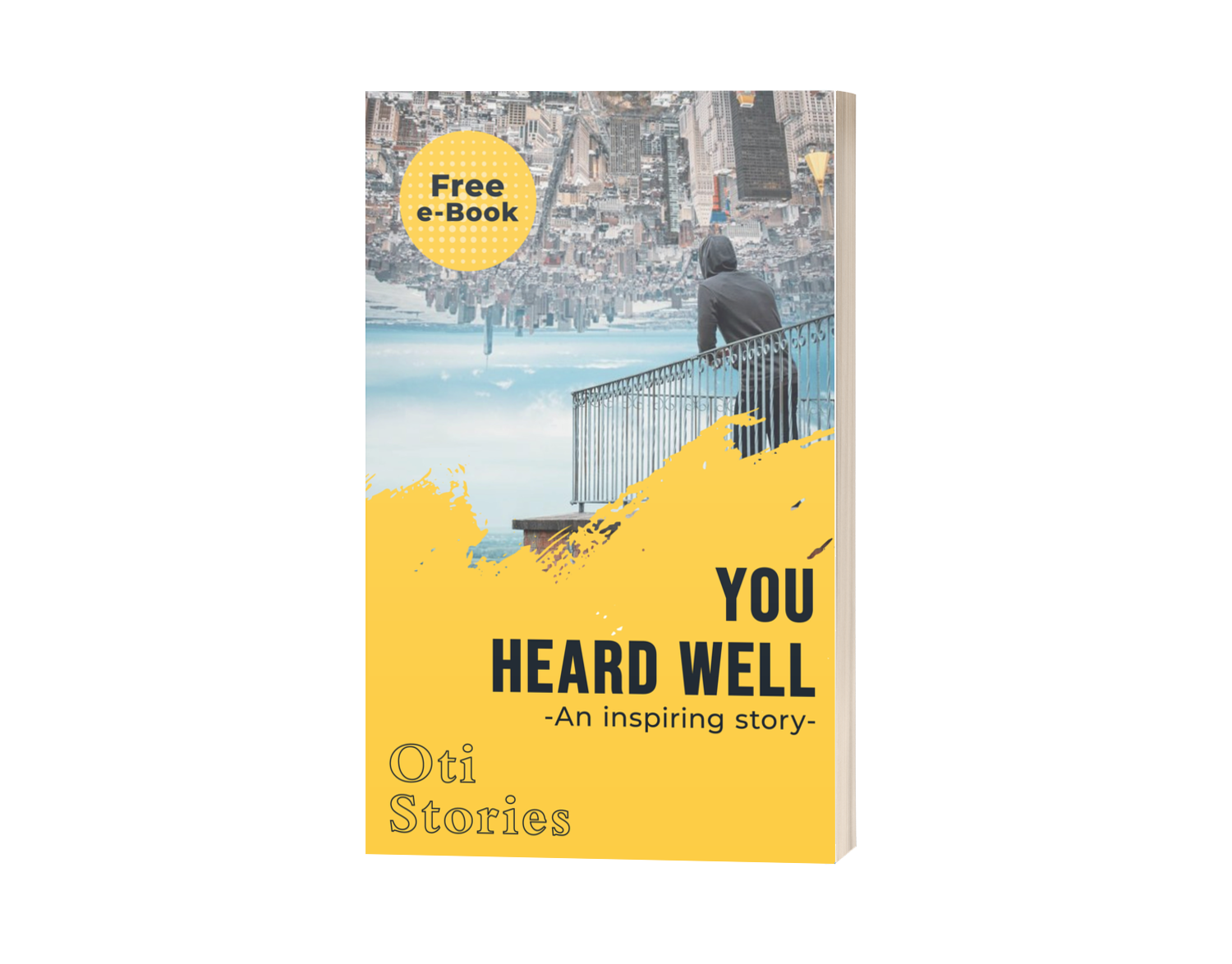 Have you ever felt like doing something but along the line got discouraged because it didn’t work as planned? Did God give you an instruction and along the line you could no longer continue with it? As you read this story, answers you have waited for, for years will suddenly show up in Jesus Name

On the 19th of June 2002, I was asleep at night with my wife lying next to me when someone tapped me. At first, I thought it was my wife who was trying to wake me up. But when, I opened my eyes, I found her still fast asleep. The tap I felt was so hard that I could not assume it was nothing. Being that I was so sure that someone had touched me, I decided to check the kids just to confirm. But on my way out of the room I realised that the door of the room was still locked. This meant that whoever had tapped me had to be someone from within the room. I checked the bathroom, the wardrobe and every other room and closet inside the room but, I didn’t find anyone except for my wife who was fast asleep. So, I went back to bed. As I laid back in bed, I felt a very strong feeling (that’s the way I can actually explain it to you) and it felt as though I needed to relocate to an expensive city in Nigeria called, Abuja. Before then, the Lord had called me into business but I hadn’t launched into it yet. I was still praying for directions on what to do and how to go about it.

I had a well paid job at that time and I was also doing well financially. But suddenly, I observed that whenever I prayed, I would see myself running my own company. I would actually see the the very kind of business like a flash and it wasn’t something I had good knowledge about. This pushed me to wait for while till I get clearer directions on how to go about it.

So, after I had that feeling to relocate to another city that night, I could recognise that it was God who was speaking. I decided to embark on a trip to Abuja. I took a 7 days leave from work so that I could make use of the period of time to secure an accommodation there as well as other basic amenities or facilities for my family.

On, getting to Abuja, my high spirit and excitement was toned down by the high cost of living there. I desired to live in the heart of the the main city but the money needed to rent a house for just one year, was too high that it would take me 3 years to acquire. The accommodation agency that I had contacted began to discourage and suggest places that I could afford a house in. I was discouraged from looking into the very good environments and my attention was taken to the slums. I was taken to those areas to check out the available accommodation but deep within I knew that those place were not the places God had asked me to go to. Come on, except God asked me to go to the slums to reside there for a reason, (of which I know would be temporal), God’s default will for His children is the good of the land. In this case I knew the slums wasn’t in the plan at all.

Again, looking at my bank account, at that moment it was impossible for me to think of living in the heart of such an expensive city with very high standards of living.

I spent the entire 7 days in a hotel in Abuja. I had decided to rally round to see if I could find a house that I could afford in my choice areas. On the 7th day, I packed my things, got into my car and drove back home feeling greatly disappointed. In few days. I forgot all about relocating to Abuja. I began to doubt that God had ever spoken to me. I concluded that all he promptings, feelings , pictures etc I thought had come from God were just my mind playing games with me.

In about six months, I completely normalised into my usual life. I was back to my job and back to living life the usual way I had lived it. Then one day I came across a book that I had playfully seized from a colleague at work. I noticed he was so engrossed in the book that day so, I took the book and jokingly told him that I wouldn’t give it back until he was done with a particular task that he should have completed an hour ago. Unfortunately, I forgot to return the book to him that day. He had already gone home at the time I remembered so, I took the book home. On my way home, I got trapped in a very serious traffic jam that lasted for about 3 hours. Out of boredom and frustration in the traffic jam, I decided to look into the book to see what the content was all about. I did that to while away ti e and keep me busy a little distracted. As I was scheming through the table of content, I got attracted to a particular topic. The topic read, “YOU HEARD WELL”. As I opened the reference page for that topic or chapter, I kept wondering what it could be all about but luckily for me I found something. It was the very answer and solution to my doubts.

In that chapter was the secret of how a particular church in Africa became the largest attended church of over a 100 thousand attendees. The founder had got a leading from God to build a 50 thousand capacity building in an outskirt of a particular city which is situated very very far away from the town. He obeyed, and when the church was ready people scarcely attended the church. Many people complained about the distance the church was from the town and so they found it very discouraging to drive about three hours and more to and fro on Sundays.

After about six months of the completion of the massive church building, the very low attendance that followed began to paint the picture that it was not God who had asked the pastor to do so otherwise God would have caused people to attend in very large numbers.

But this man did something. He took out a piece of paper. On it he wrote what God had instructed him to do, the promises God had given him and scriptures concerning God’s promises on prosperity, fame, the blessing, fulfilment etc…. After that, he gathered his pastors together, and for two years, they came together everyday to recite all that was in that paper and to pray with the scriptures. They declared and enforced that all that was in that paper would manifest as God has said in Jesus name. They continued doing that every time they met, everyday, and they never wavered in their belief that as they stood on God’s promises, things would definitely begin to align with their desires, declarations and proclamations which were in line with what God had said. They didn’t have it in mind to do this for two years. They only made up their mind to keep enforcing what should be without wavering until the reality merged with what God had promised, given and granted.

According to the book, two year later, it was as if a wind had blown not only throughout the entire nation but through out Africa and beyond. People suddenly lost appetite in attending the satellite churches owned by that same ministry. Rather, they didn’t mind coming from far and near to the 50 thousand capacity building. Currently, that church records about 35 thousand first timers every Sundays and the building have become too small that members who want to seat inside the auditorium would have to arrive about 3 hours before time.

You should be able to guess what next I did after finding out the secret of that man, whom everyone thought had just built a big church, and people began to fill it up just like that. I realised that when God speaks you have to hold on to that word until it becomes flesh (until it produces results). So, I reopened my mind to what God had told me. I said to myself, “Young man, you had heard well”. Every weekend, I travelled to Abuja and lodged in a hotel. There I spent the whole time speaking God’s promises. I commanded Abuja to respond to me, to be subject to me and to favour me. I spoke to the city and commanded it to co-operate with God’s word and so on. I did that without getting tired because I understood what I was doing and I was also so sure that I had the authority in the name of Jesus to speak what I wanted to see and that it would definitely come to pass. So I kept speaking deliberately every weekends. After 4 years of doing so, one weekend I finally felt as though Abuja had finally co-operated. I knew within that it was time to launch out and that everything I do in that city would work and become very great . I no longer felt intimidated by the high standards of the city rather it felt like I was way on top of the city.

I resigned from my job and relocated there with my family to a decent house in one of the slum areas. This time, I did it not out of intimidation and the feeling of lack of capability. Rather, I did that because that was what I could afford at that instance but I was not intimidated. I was sure that we would not stay there for long.

I set up the business almost immediately. The business site started off at my sitting room. 4 months later the business grew to its own venue though it was still located in the slums. In the following 6 months, the business was registered as a company and was moved to the most expensive place in the city. Following that, my family moved to a self owned mansion in the heart of the city. Currently I have over 3000 staff who are well paid and it is now the biggest company in that city and our products are highly demanded nationwide.

Indeed, I heard well and nothing is impossible for you with God. When God speaks, His words are like super seeds. But you have to keep resounding them till they germinate and produce fruit. Sometimes they germinate immediately but sometimes they don’t. You might have not seen any results now but that doesn’t mean that YOU DIDN’T HEAR WELL. The good news is that you must not compulsorily wait for the wind and the loud voice to come first. God has already spoken and His promises are in His word (the bible). Source for them and speak them till your life changes and the reality of your life aligns with them.