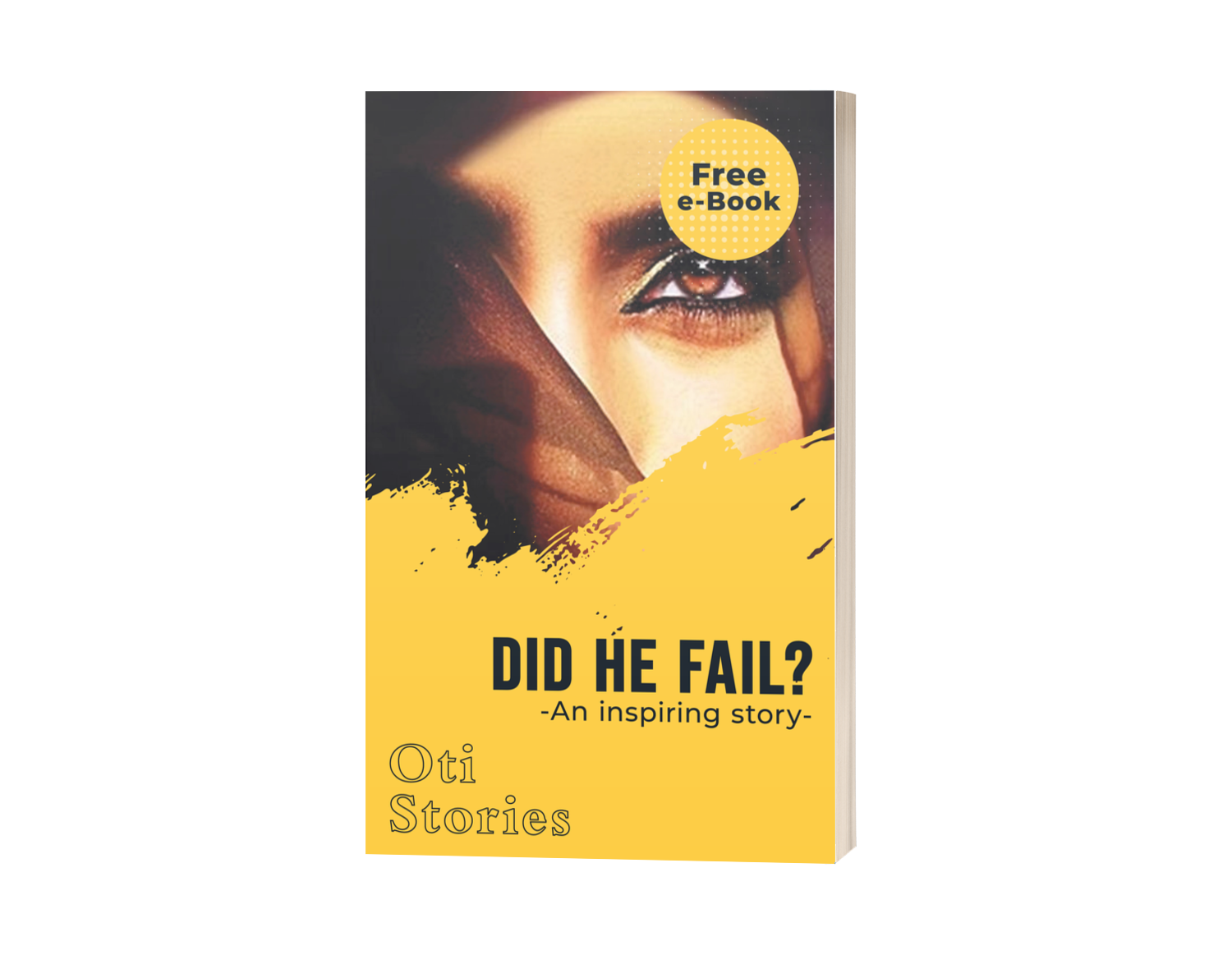 There are occasions where people doubt God’s goodness because they feel that God did not come through for them. This story may not do justice to every situation that people may have faced, but you would sure have a good understanding of why it may have looked the way it did, and of course see the way out.

“Ma, I hate God. God is responsible for all the sufferings I have gone through in life. I can never serve God. He disappointed my mother and made my sister and I to suffer.

When I was 7 years, and my sister was 5 years old, my mother was killed because she refused to deny Jesus. And God did not make any attempt to help her.

I can remember that while we were on transit, our bus was abducted by certain Islamic perverts. We were carried into a forest. There they took our money and valuables. When they were done with the raiding, we were ordered to denounce Jesus one after the other. By the time it got to my mom, she refused to denounce Jesus. They told her that she would be killed, yet she foolishly refused to denounce her faith in Christ. When the Islamic perverts told her that they would sell me and sister as slaves once she’s killed, she replied with a scripture “even though I walk through the valley of the shadow of death, I fear no evil for God is with me”. Her neck was cut off immediately!

They released the rest of the passengers whom had denounced Jesus. God did not save my mother from been killed. My sister and I cried helplessly beside the beheaded body of our mom. The Islamic perverts abandoned us there with the body. We were alone in the forest without food and water. In the evening a hunter saw us and carried us to his house out of pity after I had told him everything that had happened. Although he  also called my mom a fool as the other passengers did. Life was hard for me and my sister.

The hunter lived in a small secluded village on a remote island. There were no luxuries. We had to adjust to a life that didn’t have the comfort that we were used to. Every single day, I wished that someone related us would find us. But even if our relatives where to search for us, there was no television in that village to help us. There was absolutely nothing. I missed my school and the luxurious life my mom gave us despite the fact that our dad had passed away.

Four years later, the hunter who rescued us passed away.   His wife  had to sell us to a child trafficker. Then we were separated to live with different families as house helps. It was so painful to be separated from my younger sister whom I was meant to care for and protect. Till date I don’t know her whereabouts. A God that cannot even defend my mother, is not worth worshiping. ”

It broke my heart to hear her narrate her story. I met her on the streets selling oranges. I was attracted to her by her beautiful accent.. You could tell that she was a rich kid who had lost her way in life. So I told her that I would buy up all the oranges on her tray if only she’d tell me about herself. And that was how she narrated her story to me.

Her story threw me off balance. I couldn’t find the right words to tell her. Rather she left me with this question; ” God why didn’t you help her mother, at least for the sake of the young and helpless kids?”

I left my contact card with her, and informed her to give me a call anytime she needs financial assistance.

For days, I couldn’t get her off my mind. I kept on wondering why God forsook her mother. I knew God to be a faithful God. I had an assurance within that her mother was in heaven. But I couldn’t wrap my mind around the fact that God didn’t consider the lives of that woman’s kids. At least, God knew ahead that they would suffer if she died. Why did He turn His back on on her and allowed her to be killed by those Islamic pervert?

I kept having dreams and flashbacks to this young lady. And it really affected me emotionally. It broke me.
After some days, I made up my mind to seek God concerning this issue. God had already said in His love note, that if we are burdened, we should come to Him and He would give us rest. I needed this rest for my mind.

In seeking God, He revealed the entire truth of this matter to me.
He showed me someone who had consulted a witch doctor to kill the mother of that girl. This person was jealous of her success and prosperity and so wanted to kill this woman and destroy the bright future of her and her children. In other to kill her, the witch doctor made some fetish sacrifices for a period of 3months. After which he told the person who wanted the woman dead to expect the death of the woman anytime soon.

God saw all these. He didn’t want this woman dead. He knew the children would suffer so much if she did. So He began to prompt her to pray so that He can move in this situation. He needed her to pray, because God had given us the authority over principalities and powers.

She knew that there was something she needed to pray about urgently. She knew and could sense the red lights, to sort something out with her Jesus given authority over principalities and powers.

But she didn’t know that while she prayed inconsistently she was escaping death on different occasions. Still, that was not enough she needed to enforce  her victory over the enemy and totally address and render the works of the enemy useless through the power in the blood of Jesus  and persistent  declarations of the word of God.

On one occasion, the gas cylinder in the kitchen exploded and the fire miraculously went off. On another occasion, she had an accident and she came out unhurt. Then she escaped different instances and circumstances that could have taken her life. These were proofs that her little and non persistent responses to the strong urge burning in her heart to pray against calamity was working.

She was aware that she needed to pray until that urge lifts. She kept on procrastinating until the day that she was finally killed.

I could see that the problem was not denying God or not. There was an arrow of death shot at her that was looking for any means to accomplish the  purpose for which it was sent.

It was not an ordinary case of deny Jesus it die. The enemy had taken hold of the situation which she was required to address with the authority that Christ has given her. The authority over the devil here in this earthly realm has been given to us. We need to speak and give the command in that authority to engage  God’s response which is always there and waiting for us to take advantage of.

He also revealed to me that He is still as ready to help as He was years ago. If we pray there will be restoration, no matter how bad things have turned out and no matter the years lost.

Then the following week I began to search for the young lady. Everyday, I  searched around the location where I first met her. I finally found her three weeks after, selling oranges around that same location. I explained all that God had showed me.  I made her understand that God had been there for her but she could not see this because she was offended at God and had locked Him out of her life. Then she broke down in tears. I also told her that I would like her to live with me for a while which she agreed to.

I took her in and began to pray  with her for an hour everyday. I continued praying for restoration for about four months. Then she told me that she’d like trace her sister. With the aid of the police we were able to find the child trafficker and contact the family that had taken her younger sister year ago. That alone was a major breakthrough.

Then we started out on their education. But we kept praying for restoration everyday for an hour. Through the restoration power of God,  they  were awarded scholarships to study in highly reputable institutions. Today they are both medical doctors and are doing extremely well in medicine and other works of life. In short, they don’t even look like what they had been through anymore. They keep saying that when they look behind and try to see the past, they see nothing. The pain and hurt had totally disappeared and it felt like their lives were renewed again.

God’s will is good and perfect. It is Satan that steals, kills and destroys. The authority to either resist or permit Satan to oppress you lies in your hands. Don’t blame God for any evil occurrence. God is our companion through life and He is set to lead you beside the still waters. So don’t take any leading to pray casually. Even when it seems too late, don’t be discouraged to pray. It is never too late for God to come into the scene. God who saves also restores.

Reflecting back, its funny how people blame God. If only they would realize that God is eager to do you good. No matter the unpleasant situation that Satan has cooked up around you, it is to your advantage that you open up your heart to God to receive good from Him. All Satan wants is for you to be discouraged and to close your heart to God so he can lock you out of receiving good from your Good Father in heaven.